You can find a disc copy of this game from archive.org uploaded courtesy of the Harry Potter Archive Project.
If you try to install it on a Win 10 PC (atleast one that has >1GB RAM prolly), it’ll complain that you don’t have enough RAM (and I doubt you want to get 64mb DDR4)

Its fairly annoying to install on something with enough RAM for the ~current times~ because it overflows
I first installed the game on a Win2000 virtual machine stored in VirtualBox
Then I tried to see if I could just drag the insalled game out of the installed VM (which didn’t work)
But the game gives a log every time it crashes, so when you launch it without using the installer (because you can’t):

happens to be the error message which means its not some random memory thing or what have you!
So I ran Process Monitor in order to actually see what its trying to access in the registry.
The answer is its needing access to HKEY_LOCAL_MACHINE\SOFTWARE\WOW6432Node\LEGO Media\LEGO Creator Harry Potter. Then once you add that set of keys to the registry it complains about another registry issue.

Sadly I couldn’t just guess this one (probably could with a bit of effort but eh)
Since I had an installed copy on my Win2000 VM, I just looked at the VM’s registry. 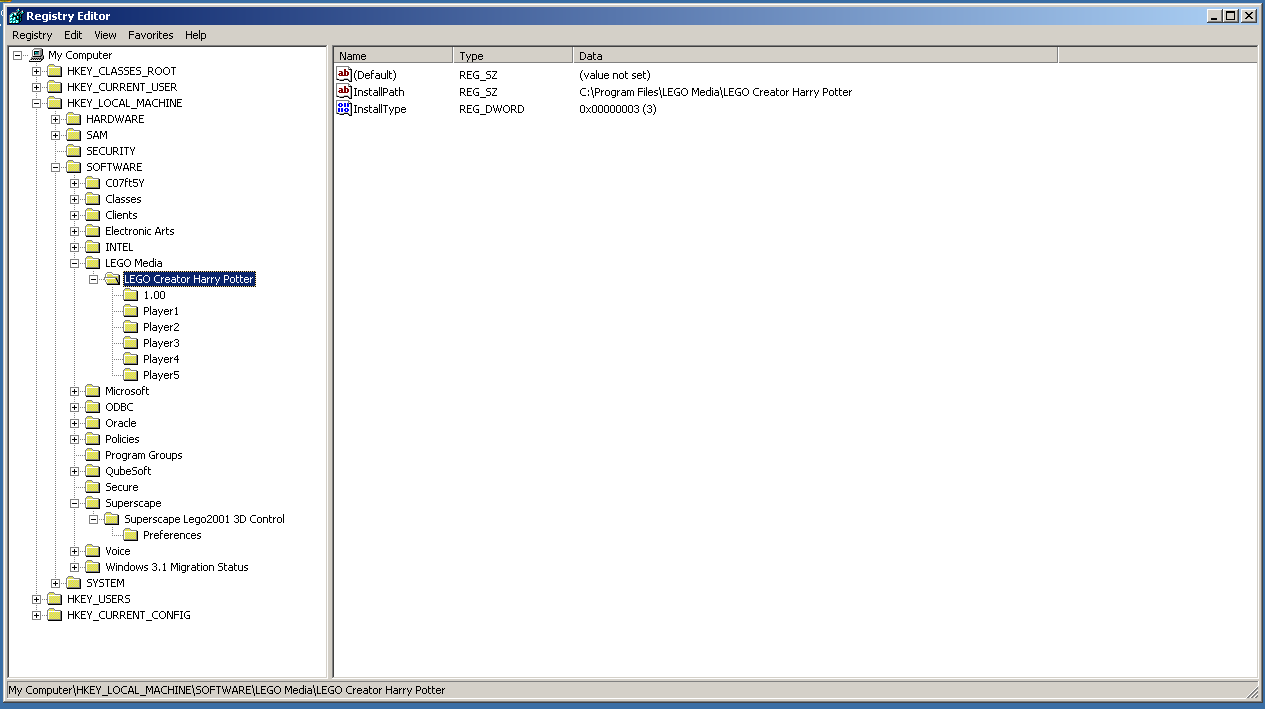 Which has a few different registry keys:

So I decided to add all of those and then it hung on launch with a fancy pants white screen
Windows itself asks for a HKEY_CURRENT_USER\Software\Microsoft\Direct3D\Shims\EnableOverlays\[EXE PATH]
I’m yet to figure out how the hell to get it to actually load on a Win10 install, I could maybe edit the installer in some way to remove the RAM ceiling?

One problem is that this game is so old enough to where all of the tools that could play the music files / convert them are now absolutely smashed to bits through time.
This game uses a DLS set of sound files (and two mp3s but they’re identical in tune)
Through about way too much digging, I was able to figure out through the Video Game Music Preservation Foundation wiki a way of playing these .sgt / .dls files…
In this case I found the easiest thing to use (and probably the only one) being the Simple DirectMusic Player by Russell Hicks which has a mirror at http://www.christianmanga.com/tbf/index.php?action=sdmp

Slight caveat being that it doesn’t actually rip them (which is a problem with DirectMusic, rather than the thing itself)
So instead I get to manually sit through and listen to them and then end them whenever I see fit because the *.sgt files actually support looping (and so does the player and you can’t disable it…)
I bet if one felt like going through the effort to either:

But instead I kinda don’t feel like doing it that way plus these edits are fairly fine imo, atleast better than none

So I sat around for like 10 minutes listening to the entire soundtrack to record them all.
They’re now available on Google Drive
(and of course they’re all ID3 tagged ❤️)

This game uses the classic trend of having 1 set of big files filled with tinier files in of themselves but its also not just a ZIP (unlike some other engines cough cough Call of Juarez)
Luckily the author of QuickBMS has already made a script using QuickBMS to extract these out making it fairly simple to read them out.

There’s not too much that I really found interesting from the paks, most of them are just fairly simple files + models

There’s the “unselected” version available on Github as well

In the game itself, these videos are actually .mpg buut those are large and I like smol files so no
Used some fairly simple Powershell and ffmpeg to convert all of them into .mp4 so I can put them all up here

Please enjoy Scabbers who is uhhhhh definitely a rat :)

Harry Potter And The Chamber of Secrets

If you want a copy of the game, especially since its old af and fairly obscure even at the time (afaik)
There’s an ISO on archive.org
You’ll also need a serial key in the format like my product key 1226-1794873-5023307-3430 or something like these
It’ll ask you if you want to register your product which uhhh almost definitely doesn’t work

In this case since it has some form of DRM so the ISO doesn’t do that, you’ll need to hex-edit the exe (in some form)
Or if you’re lazy other people did the work and idk where to get it now but Fairlight did the job

The music in this game is just *.wav files (178kbps)
But because I feel the need to be impressively extra with anything technical, I wanted to convert them the *.wavs to ID3-tagged MP3 files.

Time for some Python gists
Instead of using my old ID3Tagger python library I found a while ago (which I used for Lollipop Chainsaw earlier this year)
I chose to go with mutagen just because it seemed cleaner (and I found a dead simple guide for how to use it rather than fumbling with ID3Tagger).

After all of this finagling (fun fact thats how you spell that word apparently), you can now download the music from a random lego game from 2001 at Google Drive all of the tracks are separate, but if you want to download them all download them as a zip from our data lord monopoly Google

When you launch the game it pulls from ./lego.conf for its configuration (its just a slightly condensed INI file fwiw)
This is actually the only way to change the config settings because even the legoconf.exe is just a visual tester
At the bottom of the file is a snippet like this (this is the original unmodified version btw for restoring to)

Even though the game resets the resolution back at the bottom you can remove it (or change it there at those lines)
A few key settings I’d probably change are IntroFilmForce=17000 to IntroFilmForce=0 which means you can immediately skip the lego intro movie.
You can also just remove movies/lmiintro.mpg from the IntroFilmFile property which immediately skips it :)

I would also recommend changing the Width, Height, and Fullscreen to fit your monitor or however you want to do it.
I also changed the DisplayDriver to OpenGL rather than DX7
If you change the InputDriver to Win32 atleast on Windows 10 it just makes the mouse unusuable in game.

You can also edit your keybinds if you go into ./database/ui/keybindings/default.xml
As the name suggests its just fairly standard XML, mapping a <key> to a <Function> with a name property
I rebound my movement keys (and my developer keys) to something more comfortable to my sweaty gamer hands™
If you want my binds: look at this pastebin

If you enable DeveloperMode in the config file you get access to some funky new tools
It includes keybinds like:

The save files are stored in %localappdata%/LEGO Interactive/Creator HP CoS
It stores all user data in ./users (all relative paths here are relative to the save file dir)
The users themselves (ie where the game reads their info) are read from ./users/users.xml
The user “struct” (since its just XML) contains data like:

All of the StartWorld values come from [game install]/database/savegames/*.xml
Its fairly easy to softlock yourself (atleast without more editing) if you put yourself in a map you’re not supposed to be in at that point

A copy of this game is archived on archive.org
This one installs fairly simply and runs smoothly on Win10 afaik (not like I played much)
You don’t even really need much compatability settings on W10
I basically only enabled Disable fullscreen optimizations (and Run this program as an admin but eh)
Oddly enough every time you try to launch the game on W10, it decides to disable ClearType text meaning you’ll need to recalibrate your display between launches if you care enough about it
I also use Software Mode in the settings + High Quality (oh no my CPU totally can’t handle the game from 2000)

For a guide / setup on how I ripped the music from this game look at Harry Potter 1’s ripped music
I also tried setting up DirectMusic Producer 9 and getting it to extract out to wav (and then converting) but I couldn’t get it to run on W10 and it wouldn’t produce any noise on a Win2000 VM.

Here’s your reminder that J.K. Rowling is a TERF (alongside Robbie Coltrane and Brian Cox both of whom voiced their support for her transphobic essay) but Rupert Grint and Daniel Radcliffe are all (atleast in this aspect) better people than Rowling.

I honestly cannot do a good job of explaining J.K. Rowling’s transphobia as a cis man. I would instead recommend you watch Contrapoints’s video about her.

Please feel free to donate to The Trevor Project or any other charity of your choice.