The original 1.0 version checks to see if a CD ROM is installeed as well as if you have an Oblivion CD inserted.

For my Oblivion Downpatcher, you can see the source code on Github

If you want an explanation of why this was “necessary”, scroll down to the end result

In order to make a “console command” style thing in the Construction Set, you have to create a new quest.
This quest can have however many stages, but you can then code a script that constantly polls for changes to the new quest’s stage.
In my case I named my quest, FDHListChairs and set the stage for running to 1
One of the more important parts is changing the fQuestDelayTime to something that won’t run the script about every frame.
This’ll save on processing power as well as make it less of a pain in the ass.
Rather than doing the costly (and more annoying and longer) approach of slowly going cell by cell in the exterior, Tamriel (0,0) all the way to Tamriel (40,40).
Instead I did the world’s worst looking solution (but easier to write and honestly horrible to do in any situation).
Create an array filled with direct object references to each of the cells for example:

One of the problems with this approach is that lines will end up being >512 characters long, which for some god-awful reason, the compiler will not accept.
For some other asinine reason, the ar_Append function doesn’t work.
So instead you need to create a separate list and then use the ar_InsertRange function like so:

I ended up making a Python script to make all of these statements because I value my sanity a bit more than you might think.
I’ve yet to mention this but because the scripting language is horrible and shouldn’t ever be used, it requires that you pre-define all of the variables that you’re going to use. It also doesn’t have for loops (it does have while though)

Now that you’ve got a list of all of the cells to iterate over, you get to actually load into them and find furniture.
for loops look something like:

Because the previous array filling code is awful, I make sure to check if the currentCell variable is == 0 because any given index defaults to 0.
Then you can call PositionCell with the given cell reference like:

This approach is fairly janky but it works
Then you can check through the surrounding area for furniture.
For this I was able to use some ‘guides’ from people over on the Nexus Forums. It fairly well explained it + links to docs

Since the previous code only looped through cells in the Interiors world space, I needed to make the code also scan through the entire outside.
Each Oblivion cell is 4096x4096 Oblivion units large.
For this I basically used the same approach of the quest stage from before, accept applying it to GetStage FDHListChairs == 2.
I start the loop of by searching for chairs because its gotta be coded a bit differently for the exterior searching.
On the first run:

One of the problems with this code is that it makes the inefficient assumption that the Tamriel worldspace is actually a square.
If you’re wondering where I pulled these numbers from, I found a random map giving a coordinate overlay of all of the cells on top of a game map. 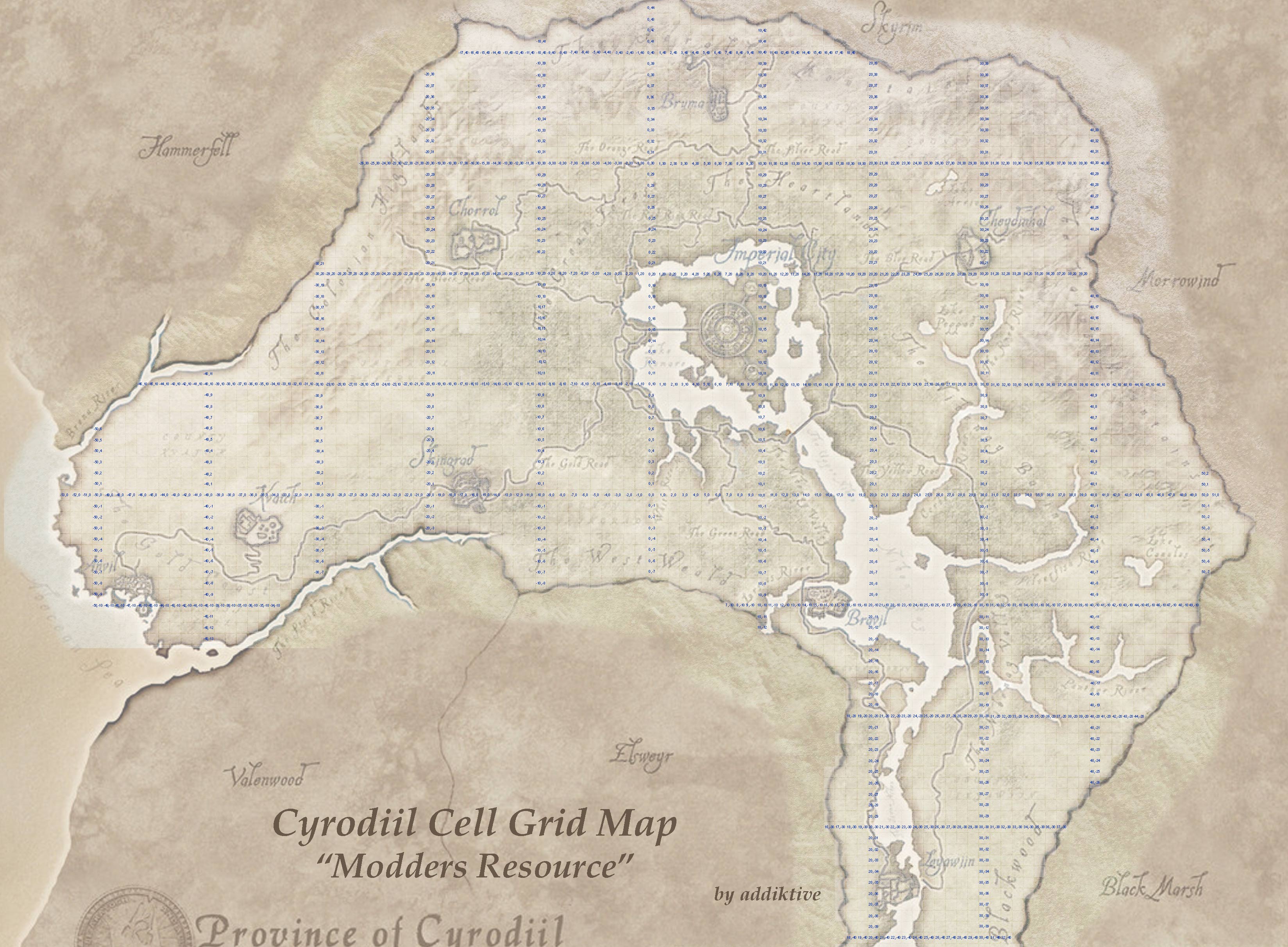 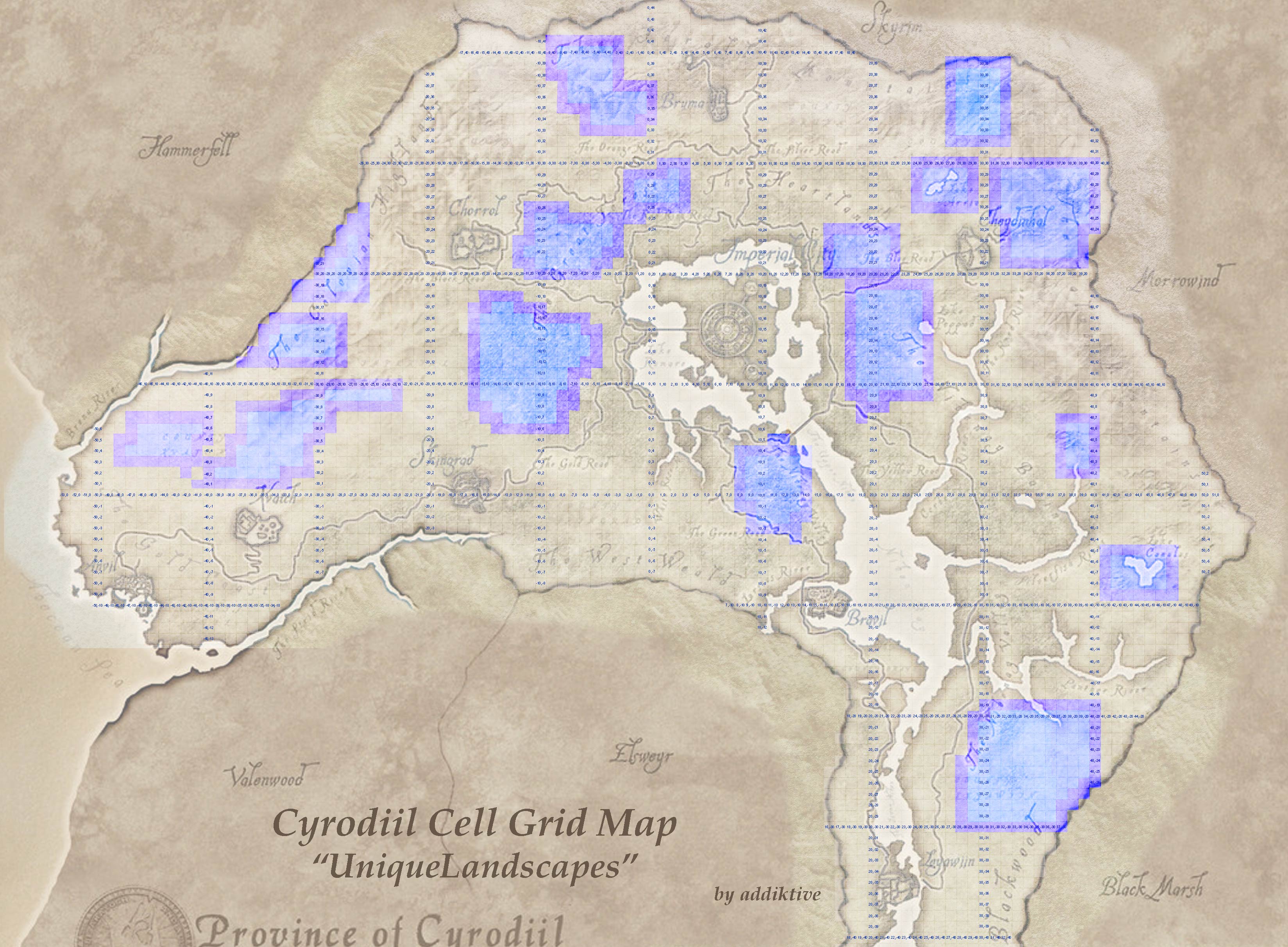 The map obviously isn’t a square so I ended up checking a lot more distance than I actually needed to but it probably would’ve taken the same amount of time to code in a proper searching function :P
The next step is teleporting the player:

The %.0f format string prints a float out with 0 decimal places btw
The next bit establishes the looping nature:

The logic makes it so that the player slowly teleports cell by cell across the map going horizontally and then looping back and going up 1 cell vertically.
This code also misses some of the other Worldspaces, meaning I needed to manually go through the other worldspaces in the editor.
It’s also currently missing Shivering Isles / KOTN (probably?)’s chairs/furniture

If you want the full hot mess of code, its available on the Gist

tldr;
It goes through a list of Interior Cells and then searches for all chairs in a ~30 cell radius
Then it goes through the whole outside map and checks for furniture there as well.

Oblivion contains a glitch called Saddle Skedaddle (it works for more than horses).
It allows you to warp to any location provided that you can find a chair in a cell with the same (or about as much) X,Y,Z coordinates.
You can also position a horse but those are a lot more off the beaten path for it to be useful in a speedrun.

If you want to scan around, I’ve got a whole spreadsheet filled with all of the chairs / beds / etc (furniture).

This gives an easy way of searching through that, allowing for ranges between all of the values
It uses a JSON file to be able to pull the info from.
There’s also a JSON file for information about all of the cells, as well as a JSON with info about just the interior cells, and a CSV version of the previous spreadsheet.

Using the editor, you’ll be able to export a ton of data that’s (somewhat vaguely) useful.
There’s descriptions.json which has data about descriptions of objects.
Most of the names are fairly self-explanatory compared to the button which does the extracting in the editor, i.e. descriptions.json comes from File -> Export -> Descriptions
Some of these JSON files have been modified a bit for a bit more useful information / reducing requests if you actually care to use this.

factions.json stores information about the factions, more specifically all of the faction’s Rank names for example:

There’s names.json which has objects storing other game object’s EditorID (described as Name) and the displayed string (described as Value):

This is sorted by the type of the object like types:

quests.json has more information about quests, some of this data pulls from descriptions.json, but you won’t need to request that JSON file either as well as names.json.

It contains data about the stages of quests (and the quest names + IDs):

The Stage[StageNumber] is an array because certain stages can have multiple Log entries, the index in the array is the log entry index.